Throughout history, the crib-biter has been the scorned horse — but in the 21st century, this stereotypic behaviour doesn’t have to be a deal breaker. There are ways to manage the health of horses who crib and wood-chew, while also protecting your beautiful fencing…

Setting eyes on a beautiful, horse-safe fence gives the typical equestrian a dopamine rush. It’s like buying a new rug or laying eyes on that first foal of the season. It’s addictive.

It’s little wonder that we invest so much in our fencing. It not only enhances the look and value of our property but also keeps our cherished horses safe. So what happens when your treasured steed turns to chew wood? We love our horses, but they can be heartbreakers in every sense of the word.

The crimes of cribbing and chewing

Horses that crib-bite or chew wood can cause serious damage to your fencing, however in seeking the solution to the problem it’s important to understand that there are fundamental differences between the two behaviours. 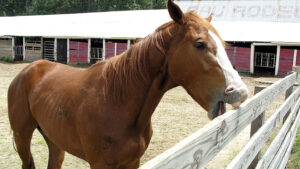 Cribbing — where the horse places its upper incisors on a surface, arches its neck and pulls back while sucking in air (wind sucking) — has been a cause for concern since humans first began interacting with horses. Archaeologists in France found equine remains dating back to the Palaeolithic period that showed teeth wear consistent with cribbing, while the topic first appeared in literature as early as the 16th century.

While there is still much to learn about why horses crib, it is universally considered a stereotypic behaviour. Recent studies suggest that stress is a likely factor, and some researchers have shown that when horses are allowed to perform stereotypic behaviours such as cribbing, they record a reduction in either the stress hormone cortisol or their heart rate. It is thought that rather than the horse being “naughty”, the act of cribbing is actually a coping mechanism. Perhaps not always easy to accept when there are teeth marks in your beautiful new post and rail fence.

Interested in reading more? Read the full article at equestrianlife.com.au

Find a dealer near you and see what they’ve got in stock.

Complete our online enquiry form to get an estimate.

Spend $500 or more and get a FREE Yeti Tumbler.